The summer has flown by.  We had a week or two in August when we tried to chip away at our ‘To Do’ list but found it rather hard because it was so hot so progress was slow.  We hauled the boat shortly before departing for Oregon where we spent time with Scott and his fiancé, Kendal and her parents.  Despite the fact that Scott was studying for board exams which he took in Spokane, WA while we were there, we were just so happy to be with him and to meet Apollo, their 4-month-old Weineramer puppy who was a bundle of fun, especially on the beach!  We also caught up with how the planning for their wedding in early March is progressing.

The picture of the flaming sky above was taken upon our return to live on the boat in the ‘parking lot’.  Fortunately the heat had subsided somewhat so we became a bit more productive.  For those of you who are familiar with the boat, you may be able to recognize some of the changes we have made from the photos below: 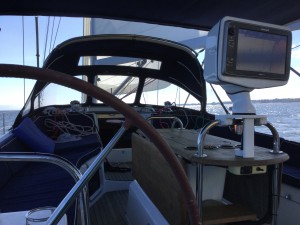 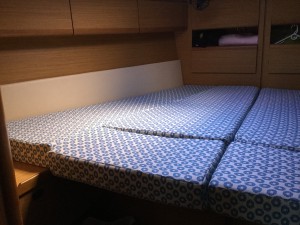 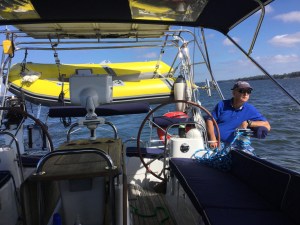 Yes, we had Vicky replace the dodger windows and add a new one in the next panel up, Scott, our wonderful electrician, moved the chart plotter up from below the table and into a Navpod which means it is much closer to eye level and can be swiveled, depending on which side of the boat you are helming from.  I replaced the cushion covers for all the cushions in the forecabin, and we both worked on removing and replacing the rubbing strake on the dinghy as the person who had done it previously made a bit of a mess of it, using the almost impossible to remove 3M 5200 adhesive that really didn’t work too well for that application.  We then painted the top sides bright yellow.  Many other less obvious tasks were completed, such as Howard polishing the entire boat hull and top sides, replacing a worn cutlass bearing and dripless seal, working the through-hulls that had become very stiff, having the water maker serviced so it wouldn’t leak, replacing and re-positioning the starter beaker switch on the generator and the solenoid – which was the probable cause of it tripping, installing fans in the main cabin, improving the automatic bilge pump systems, etc., etc.

We took the boat to Annapolis for the Boat Show the first week in October and spent about 3 days on anchor in Spa Creek behind the draw bridge.  It was a very social time, what with an Ocean Cruising Club event one evening, a Salty Dawg event the next and getting together with our friends, ET and Joanne, Jo and Julie, Tom and Lorna, Cliff and Nancy, Jon and Gretchen.  We also helped out on the Salty Dawg booth for about 5 hours on the Friday.  We had initially planned to head down the bay from Annapolis but decided to head back to Worton Creek so Scott could take care of the VHF GPS position which he had fixed but then disappeared. It was a 5 minute job for him to find the loose connection.