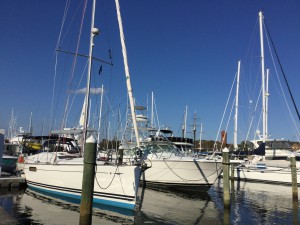 While most of our efforts since arriving in Hampton have been prepping the boat for the trip south, Howard did take time yesterday and the day before to help a friend take his catamaran, a Lagoon 42, over to Cape Charles where he was to haul it for the insurance surveyor to check the integrity of the hull following a lightening strike earlier this summer.  Just as well Paul has a bent for electronics otherwise he wouldn’t stand much of a chance of getting his boat ready for the trip south.  Anyway, the trip to CC turned out to be more exciting than they had bargained for.  They arrived in CC on Wednesday evening and had a pleasant evening enjoying some rather large impressive vessels in the marina.  Next morning they were to be hauled at 8:30 but found the boat couldn’t be hauled bow-in so they backed out and then had an issue with a gear cable on one engine, causing them to very nearly ram into the most beautiful 170 ft schooner, Meteor, which is currently listed for sale for a mere 25,000,000 Euros!  That would have ruined Paul’s day.  Thankfully they managed to tie up to a dock with help from kind folks ashore who caught their lines and pulled them in and were lucky to be able to obtain a replacement cable, have it installed, have the boat hauled, complete the survey (all OK there ) and return to Hampton around 9:30 last night.  In case you don’t want to check out Meteor websites yourselves, here is a photo Howard took.  Isn’t she beautiful? 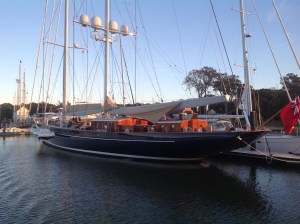 Meanwhile, I was able to turn our boat into a sewing workshop so I got on with my project, the Bimini extension, which I have been working on for several weeks, it seems.  Today I finally finished and installed it …. and, though I say so myself, I am quite pleased with the results.  It should mean that the helmsman (and dinghy) are much better protected from the sun primarily but also the rain. 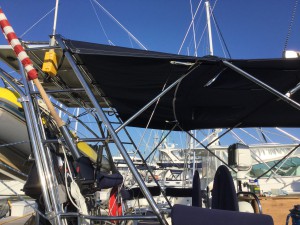 I also went up the mast to lubricate a block at the top of the track for the whisker/spinnaker pole and install a line.  We are expecting the whisker pole that we ordered at the boat show to be delivered soon. 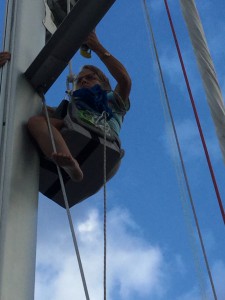