With light winds forecast to veer from NE to E to SE overnight, we set off from Torrevieja for Ibiza around midday on Tuesday, with an estimated passage time of around 18 hours. Under full main and genoa we initially sailed close-hauled on a more northerly course.  Thankfully the forecast turned out to be accurate so we did indeed manage to gradually make more easting towards our waypoint off Ibiza.  The wind was a little variable and gradually diminished in strength, sometimes dropping to 6 knots but we were in no rush as we didn’t want to arrive before daylight; our only desire, sadly almost but not quite realized, was to pass a French 46 sailboat ahead of us; although we did gain about 6 nm on him.  We continued to sail until until about 8am, utilizing our usual 3-hour watch system, with the off-watch person being readily available should the need arise.  We had multiple layers of clothing on plus full foul weather gear to stave off the chill overnight.  One advantage of motoring the last little bit was that we were able to test out the water-maker.  It settled down after about half an hour of occasionally rejecting the water due to high salinity to make almost 13 gallons an hour and thankfully we saw no sign of any leaks …. long may that last!

Initially we anchored in Cala Es Jondal on the south coast, having taken a peek at the smaller and maybe more protected Calla Porroig around the corner.  However, there was a bit of swell, some stronger winds in the forecast, and wishing a good nights sleep, we opted to proceed to San Antoni, a larger harbor on the SW of the island.  The coastline along the way was spectacular with jagged rocky cliffs and outcrops.  The idea had been to either anchor or pick up a mooring ball in San Antoni. However, the options for anchoring appeared to be limited and we were unable to communicate our desire for a mooring to Club Nautico so we ended up taking a berth in the marina which actually worked out to be much more reasonably priced than we expected so here we are, still in the marina three days later!

On our tour of the moorings we noticed that Pantalaimon, a Catana 42 catamaran, and our neighbor in Cartagena, was at anchor so we dropped Alex and Anna an email letting them know where we were berthed and shortly thereafter they showed up in their dinghy at our transom.  We enjoyed hearing of their adventures (some better than others) over a beer since they left a couple of weeks ago (before the strong winds hit).

Yesterday, feeling refreshed and revitalized after a good nights sleep, we took a half-hour bus trip to Elvissa, a former Phoenician port on the other side of the island.  There was even a dual carriageway on the way!  It was a well worthwhile trip, despite initial impressions of the town being overwhelmed by mostly English-speaking tourists, even this early in the season.  The large port is overlooked by a citadel high at the western entrance to the harbor.  The old town (D’ Alt Vila) surrounding the citadel is well preserved and is defined by an amazingly thick stone wall built in the late 16th century. 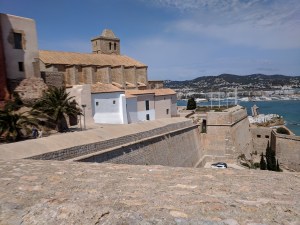 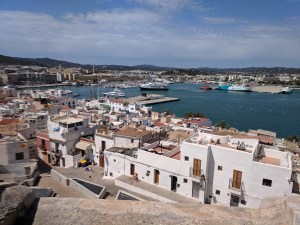 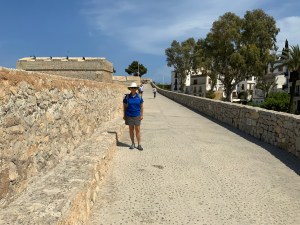 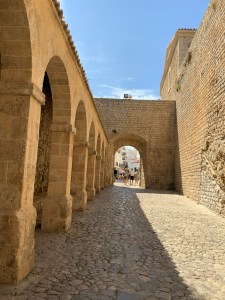 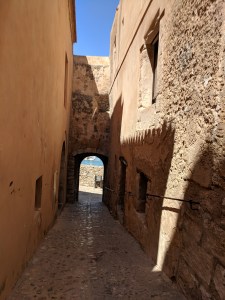 Today we replenished some of our supplies (mostly liquid) at the well-stocked Lidl nearby, Hope got a haircut and we found the more interesting part of San Antoni, though it is still not a patch on Elvissa.  We had hoped to walk the coastal path to see the sunset this evening but sadly the clouds have rolled in and there is now a light drizzle, so that option looks highly unlikely.  We may stay another couple of days before proceeding around the western coast to an anchorage in preparation for the hop over to Mallorca in a few days.