The three-day passage from Porto Palo, Sicily to Chania, Crete ended up being benign. We had time on our side which meant we could take it fairly slowly a lot of the time in the light northerly winds.  However, the old iron genny ended up being used more than we would have liked during a 23-hour stretch of practically no wind at all in the middle.  We each took 3-hour watches overnight but there was no formal watch schedule during daylight hours.  Fortunately there was a plethora of shipping practically the whole way so we always had something to focus our attention on; boredom was not an issue.  I (Hope) was the lucky one who had the pleasure of dolphins appear during my morning watch but, apart from a few sea birds, that was the only wildlife seen.

We arrived in Chania late morning and, after taking our time to prepare fenders and lines, we successfully berthed between two other boats stern to the town dock, having dropped our anchor to keep the bow off.  I guess we will become pros at it by the time we leave this area as it is the Greek way of mooring.  We were greeted by Spiros, the harbour master, who took our lines and was most welcoming.  We then had to obtain a DEKPA (Transit Log) and pay the new Greek TEPAI tax.  Unfortunately we discovered that the customs office was in the commercial port of Souda, a 20-minute bus ride away, and not in Chania as we had been led to believe.  At least nobody seemed to care if we delayed it until the next day, which is what we did.  The whole process took up the best part of half a day because once we had the Transit log, we then had to check in with the Chania Port Police who stamped us into the port.  Now we are obligated to check in and out with the port police at every port we visit in Greece … but at least we are finding that the dockage fees at town docks, are almost insignificant.

Chania is a very attractive, well-protected Venetian port with a lovely lighthouse at the end of the breakwater marking the entrance to the port.  We found that we could eat out quite well for not a lot of money, which has certainly been a very welcome relief from cooking onboard in the sweltering Mediterranean August heat. 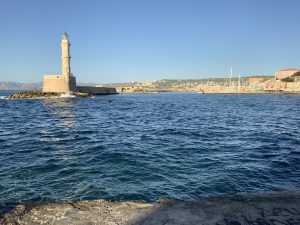