It is hard to believe that we have been in Turkey for about three weeks now …. time has flown by, probably because we have been having such a lovely time.  The 25nm sail across from Rhodes to Marmaris was fairly fast with wind a bit aft of the beam most of the way until we were within a few miles of Marmaris.  Checking into Turkey was made simple for us because we hired an agent, Ugar, to do the leg work for us.  He met us at the customs dock outside the marina, walked us through immigration then met us at our berth in the marina an hour or so later, having completed all the rest of the paperwork, while we were in the ‘Duty Free’ which they opened especially for us; our agent was well worth the expense.

Marmaris is clearly a huge yachting center, bigger than most marina facilities in the US, as well as being a busy tourist center with oodles of beautiful Turkish Gullets mostly lined up on the harbour wall, waiting to take paying passengers out to see the sights.  Indeed we don’t think we have ever seen as many yacht chandlers concentrated in one location anywhere else in the world as we saw in Marmaris. …. and there we were thinking we should obtain as many spare parts as we could before getting to Turkey! Also the ability to fabricate and repair rather than replace with new still appears paramount here. 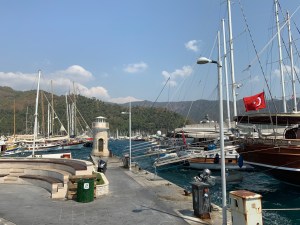 We had a few days to spare, which turned out to be very useful as our windlass (for pulling up the anchor)  had been leaking gearbox oil.  So, with a recommendation from Ugar, we had a mechanic dismantle it, order the necessary spares, give it a complete service and reassemble it a few days later, once the spare parts had arrived, and well before our next guests arrived on September 4th.  We also found a rigger who was able to fabricate a new plastic collar for our boom vang, both within a day and to tight specs, so it doesn’t wobble anymore.

Meanwhile, Steve kept himself busy by signing up for not just one but two consecutive PADI courses (a total of 5 days training) so he ended up getting the Advanced Open Water diving certification in a very short time (thank you Scott and John Grey for his introduction to diving).

Netsel Marina in Marmaris is a rather large marina that is part of the Setur group of marinas along with Finike.  Included in our annual contract with Finike, where we plan to overwinter, we can stay at any of the 8 other Setur marinas in Turkey for up to 30 days for free – what a great bonus! The only downside to Marmaris was music from the bars which started at about 20:00 and finished around 03:00. Then there was also the regular call to prayer, relayed by loudspeaker from the mosques. Turkey after-all is a predominantly Muslim country, although the prayers sounded somewhat different to what we remembered from Kuwait; could be that they were in Turkish.

We stayed another night in Marmaris after Jim and Tina arrived to celebrate their 40th wedding anniversary with their friends, Andrea and Duncan, also with Kuwait connections and who had been living in Turkey for the past 8 years.  We all had a lovely dinner together at one of the many seafront restaurants in Marmaris.

Jim and Tina have been coming back to sail in these Turkish waters almost every year since before we last sailed with them from Cyprus to Turkey, around 1984 on their Vagabond 47, so they were a great source of information about where to go and when to set off each day to take advantage of the afternoon winds.