I guess we breathed out while in Almerimar as we ended up staying 9 days.  We checked out most of the marine services, all very helpful folks.  The stainless steel guy, Stewart, made a fitting for us to attach our passerelle at the bow, meaning we can now get off the boat easily when we med moor bow in towards the dock.  Since we have no bow thruster to assist when manoevering in confined spaces of a marina, it will make docking much easier, especially when it is windy, and will also give us more privacy when docked.  Another success was getting our GPS position to appear on our VHF and SSB radios (essential for emergency DSC broadcasts) without having to have our old, power hungry chart plotter on, thanks to the efforts of the Raymarine guy, Spencer.

We also managed to have time for ourselves, sometimes walking the long, probably at least a mile, promenade along the bay, having an afternoon swim off one of the beaches to cool off, or checking out several of the bars and restaurants in and around the marina.  As is typical in Andalucia, we often weren’t charged for tapas when we ordered a drink ….. but of course some of the tapas were better than others.  Indeed, it turned out that our closest restaurant, just a few short steps from the boat was perhaps best.  They didn’t speak a word of English and our Spanish is not much better, there was no written menu but somehow we managed to eat very well …. as you can see from the seafood platter that the two of us were presented with on our first visit!

One day we took the bus to Almeria, which probably took three times as long as it would have by car …. but it was an experience to be driven through mile upon mile of road with plastic greenhouses on either side.  By the time we arrived it was almost siesta time and the main attraction, the Alcazaba (large Moorish castle), was closed until the evening. The fortified cathedral was, however, open and proved to be much more impressive inside compared with the rather austere exterior that was effective at defending against attackers. There were even arrow slits in the walls, not your tyical cathedral architecture.

One advantage of delaying our departure was that the winds finally changed from easterlies to westerlies.  Our first stop after Almerimar was just past Cabo de Gata, an impressive headland that marks the transition from the Costa Del Sol to the Costa Blanca in a relatively well protected bay, Playa de los Genoveses. Although there were people on the beach, it was quite unspoilt, lined by cacti, etc. The next day we had an even better downwind sail, doing over 8 knots much of the time with just the genoa!  So, we decided to continue further than we had planned.  We had read about another anchorage that looked as though it would be a comfortable, protected spot for the night but when we poked our nose in, there clearly wasn’t enough room as the swimming area off the beach had been extended. Fortunately we had a plan C worked out which was a small private marina, Juan Montiel, just a couple of miles further along, whew! The Costa Blanca coastline is more rugged than the Costa del Sol, less touristy/built-up, not much plastic, fewer beaches, and a lot more interesting visually.

And now we are in Cartagena…. the most impressive natural harbour we have seen to date on the Spanish coast.  Clearly it has long been recognized as such since this is where Hannibal set off from for his historical trek across the Alps in 219-218BC!  We are looking forward to finding out more of its history over the weekend by visiting some of the museums.  In the meantime, here are a couple of snaps showing a few sculptures around town or in the harbour…. 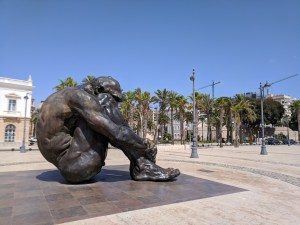 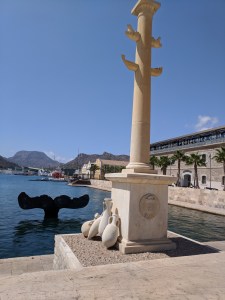