As most of our family and friends know, we ended up wintering the boat in Cartagena.  It has suited us very well and we will be sad to leave in a couple of weeks.  The harbour itself is well protected so it is very understandable why it has been an important port since before the Carthaginians founded the city in 227 BC.  It eventually became, and continues to be, Spain’s main naval base in the Mediterranean with dockyards and shipbuilding capabilities.  Today this large harbour is additionally home to two marinas (YPC, where we have wintered, and the RCRC yacht club, that mostly caters to local boaters), a container port, a fishing port and an oil terminal (hidden from view by some hills). Having tracked a few winter storms in the Mediterranean, it appears that Cartagena is in a sweet spot that seems to avoid the full brunt of storms that either enter the Med via the straights of Gibraltar or via the south of France, though I think this winter has been better than usual.

Having had such a long history, Cartagena offers plenty of interest.  The earliest human remains found near Cartagena (close to Mar Menor), date from about 1.3 million years ago but it was during the 1,200 years between the 7th century BC and 5th century AD that it really flourished and became one of the largest and most important population centers in Spain. The Carthaginians were ousted by the Romans in 209 BC during the second Punic war, while Hannibal and his army were in Italy with their sights set on Rome.  Renamed Carthage Nova, the city was clearly valued by the Romans, thanks in large part to the rich mineral deposits of silver, copper, and iron in the surrounding Sierra Minerva hills.  It became an important trading port with much of the wealth reinvested in buildings such as the theatre, amphitheatre, forum, baths, and, of course, roads.  Today the Roman theatre and the baths are major attractions, whereas very little of the amphitheatre is visible because a bull ring (now in disrepair) was built on top of it. Some of the Roman roads are visible in various places around town (under the Chinese ‘Tedi’ store, for example).

Cartagena suffered when the Roman empire declined and eventually failed in the Western Med, towards the end of the 5th century AD.  The city was laid to ruin by various invaders (Vandals, Visigoths, Byzantines) until the Moors started to rebuild it and created some stability between the 8th and 12th centuries.  Christianity was re-established in Cartagena (having been introduced initially by the Romans) in the mid 13th century.  The port continued to suffer attacks but it was not until after the British took brief control of the city in the early 18th century, that the city became a Spanish military bastion and home of the imperial navy.  Fortifications around the port were greatly improved and most of the naval buildings that still exist today, some of which have been repurposed, were built in the ensuing century.  The mines were active and gave rise to the “nouveau rich” in the city with their elaborate buildings.

Fortunes again changed in the 20th century with mines closing, when the minerals were exhausted, and infrstructure damage was sustained as a result of a strong Republican base that held out as long as they could against Franco during the Spanish Civil War.

Today, Cartagenans clearly celebrate their history and are actively preserving it in creative ways, primarily to attract tourists.  There are several museums to choose from, depending on the historical period you are interested in, one of our favorites is the underwater archaeological museum that has a replica of a Phoenician wreck, over 2000 years old.  A large oil terminal and associated refining, gas, cement, etc. plants tucked behind the hills away from the city, provide much of their income so the city has a lively feel to it without being overrun by tourists. The lack of beaches, space, and high-rise hotels limit tourist numbers, fortunately. There is a plentiful supply of tapas bars, good supermarkets and a delightful market that is open everyday, except Sundays and Mondays, selling local produce (mainly fruit, vegetables, and seafood). One of our favorite stalls in the market is one only selling an amazing variety of delicious olives. Additionally, there is always something going on in the city, for example a festival towards the end of September that reenacts the Roman conquest over the Carthaginians; Christmas decorations include numerous street lights and a most impressive diorama of ancient Middle Eastern sites and buildings, with a finite end to the celebrations on Three Kings Day. The latter celebrated with a very large king cake provided to the people in the town hall square.

We were here for the Carnival, the week before Lent, which was another impressive event. However, we still are unsure regarding the english tranlation of the final event of the carnival, described as ‘Mr. Carnal’s balls and Mrs. Cuaresma’s breasts tasting’ followed by ‘Mr. Carnal burning and fireworks’. What this was all about …. the mind boggles! 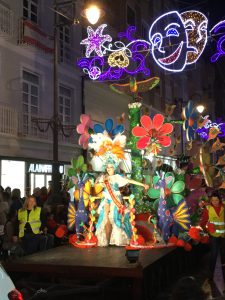 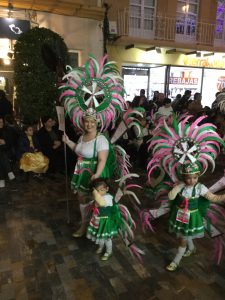 We have found everyone here to be very helpful and friendly, particularly the marina staff.  There is rarely a dull moment in the marina where the many international ‘liveaboards’, who come and go throughout the season, organize events even on top of the regular Wednesday evening tapas in town and Sunday BBQ.

We can definitely recommend Cartagena as a place to overwinter.