We are happy with our decision to stay in Siteia until the strong Meltemi wind receded.  It seems the eastern end of Crete tends to be windy because the northerly winds funnel around the end of Crete between the two southernmost Dodecanese islands, Kasos and Karpathos.  Sunday was the peak so we stayed onboard most of the day, checking and rearranging our lines and fenders to minimize chafe from the concrete dock and stress on the boat as she coped with the forces from wind and waves.  Even so, two lines were damaged and our fenders got a bit of a beating but the boat was unscathed.

By Tuesday we were comfortable leaving the boat for the day while we explored some of the eastern end of Crete in a rental car.  We had a great day, heading first to Zakros where we parked the car at the head of the 4km trail through the gorge (which is the end of the European E4 trail and is also known as the Valley of the Dead, because the Minoans buried their dead in caves in the gorge) to pop out near the ruins of Minoan Zakros Palace and a short distance from a wonderful taverna on the beach in Kato Zakros. The taverna served us two very welcome, very large, cold beers and a large bottle of equally cold water, followed by a tasty lunch (Hope had octopus in a red wine sauce – delicious!). After lunch we had a brief (because there were just too many cars and busses) photo stop at Vai beach, famous for having a very large grove of Cretan date palms, The hills and valleys on the twisty road to Zakros were covered in olive trees. Interestingly, they must be a different variety as they were quite small, compared with your ‘standard’ olive. The ancient monastery of Moni Toplou has spun off an olive oil and wine business; they had been producing oil and wine for hundreds of years, but now only three monks remain.  We had a wine tasting session there; we would need more time for the Cretan red to grow on us. Their very modern distillery produces raki.

So, five days after arrival in Siteia, we were happy to set off again.  Steve managed to make it back just in time from his adventures off-roading and hiking/climbing to remote corners of Crete as we were at the point of getting our shore lines ready for departure.  Our next stop was Fri (pronounced “free”) on the small island of Kasos.  We had one of our fastest passages sailing with reefed mainsail and genoa on a broad reach in 16-20 knots of wind, lovely!  It was just as well because we had about 45 n. miles to cover but we made it in by 5pm, well before dark, thankfully.  Fortunately the outer breakwater had been extended in recent years, because we discovered there was no room in the very small inner harbour.  We ended up tying up on the outside of the harbour wall (near where the ferry docks) with the wind pushing us onto it …. we were fine but our fenders got another good work-out (see photo at the top of this post)!  Fri is a charming little port with the more typically Greek style of white-washed houses with blue accents.  It is the only community on the island; the rest of the island is inhospitably mountainous.  We did have another good meal ashore, though there seemed to be a bit of miscommunication because we ended up getting way too much food, especially Steve who received 1.5 kg of grilled lamb chops instead of the 0.5 kg he ordered…. he was up to the challenge! 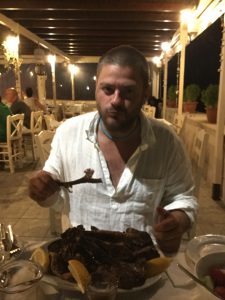